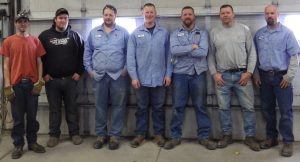 Earlier this fall, a Seitz team was tasked with getting as much done as possible on two air handling units for a Caloris spray dryer customer. During a 2-week timeframe, 85%-90% of the units were completed, leaving very little to be completed in the field. Charlie Booth and Steve Sand worked many hours to set up both units, were the main fabricators on one unit and supervised the second unit. The main fabricators on the second unit were Matt Terhaar and Seth Strassburg. Pictured left-right is the entire team who worked on the units: Jeremy Lemke, Seth Strassburg, Steve Welinski, Steve Sand, Charlie Booth, Ron Buerman, Matt Terhaar.

Have a product that is not listed?

If it is made of stainless steel, chances are we can build it. Please contact us for a quote!